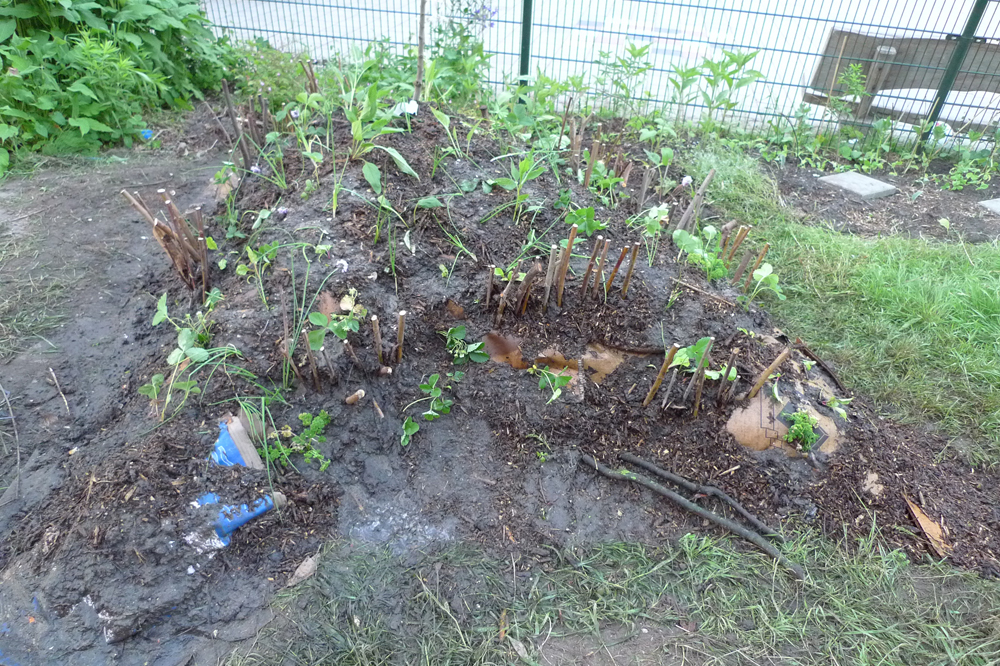 Not unlike the westside, the DemoGarden eastside soil is piss poor. And with the elders along the perimeter still too short to shade the view to the school, the rambunctious northern neighbours remain visible (and audible) at all times. By placing 3 of our apple trees on Hügelbeds we hope to obscure the view a bit (whilst the elders bush out along the fence). We also hope that the warmth produced by the decomposition of the wood inside the Hügelbed keeps our artichokes toasty warm all the livelong winter. Maybe our luffahs and calabas will produce this year. That means BATHS & BONGOS next year!

Here’s how we made a Hügelbed in 13 easy steps: 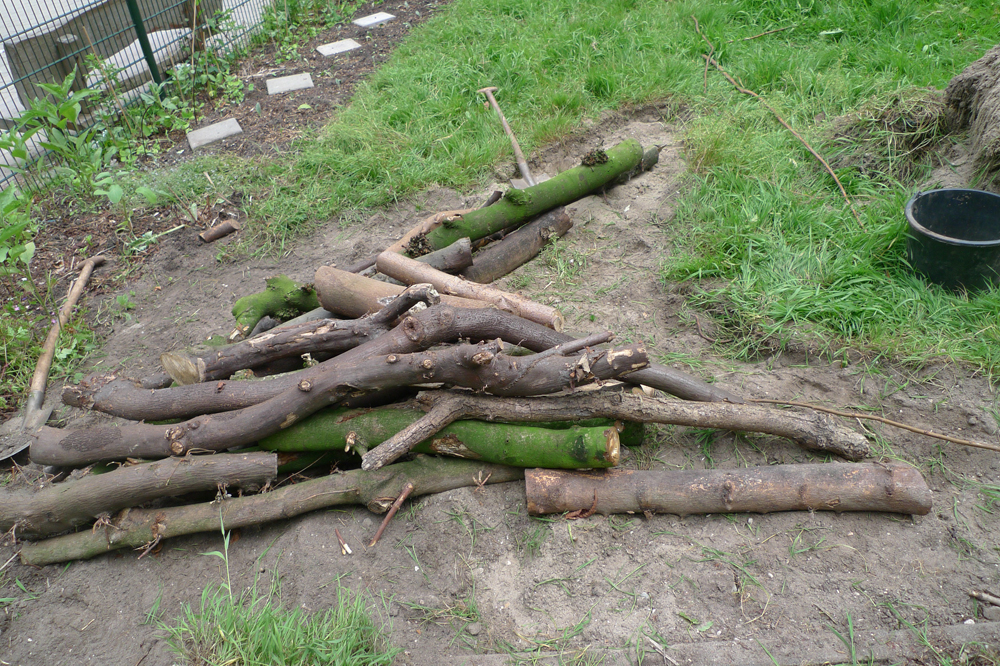 1 – Remove underlying sod, roll it up and save it for later. Position the logs as desired. 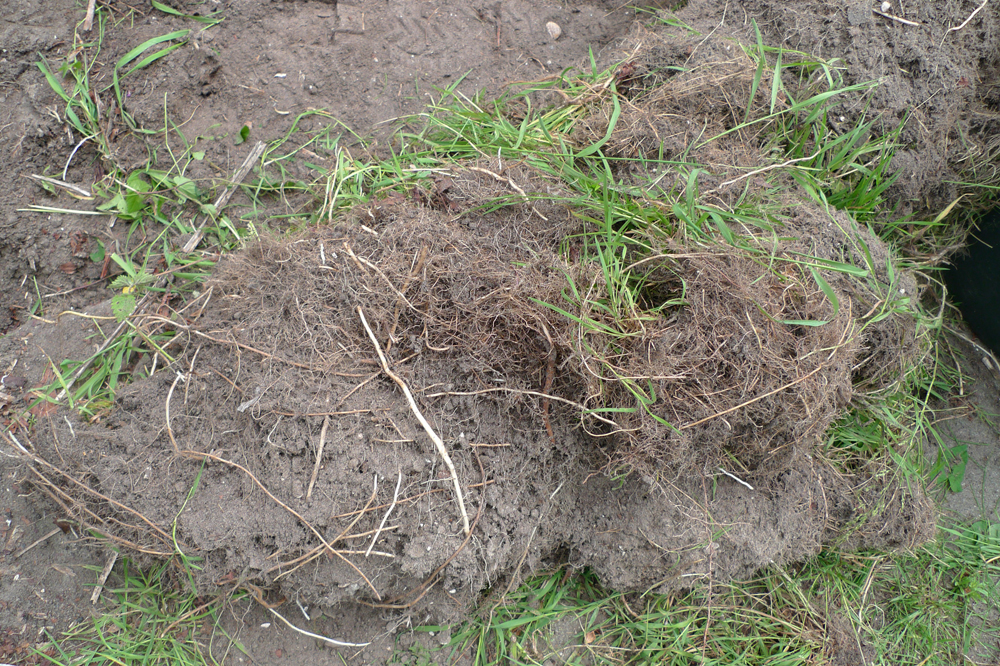 2 – This roll of sod will soon come in handy, but mind the couch grass roots! 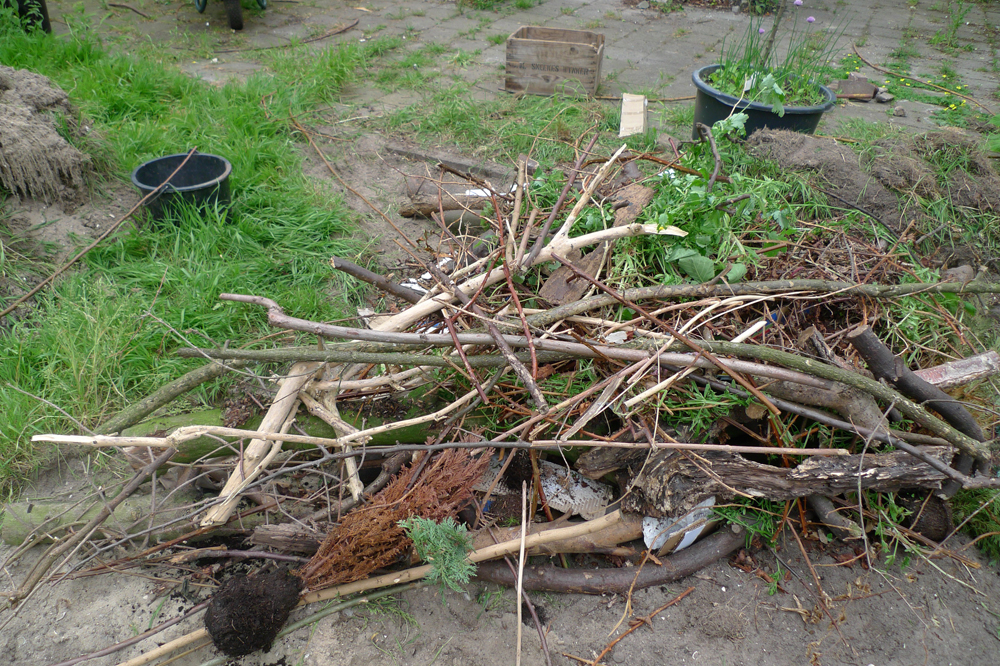 3 – Place branches, twigs, and cardboard on top of the logs. If you have access to water, give the pile a goodly squirt. 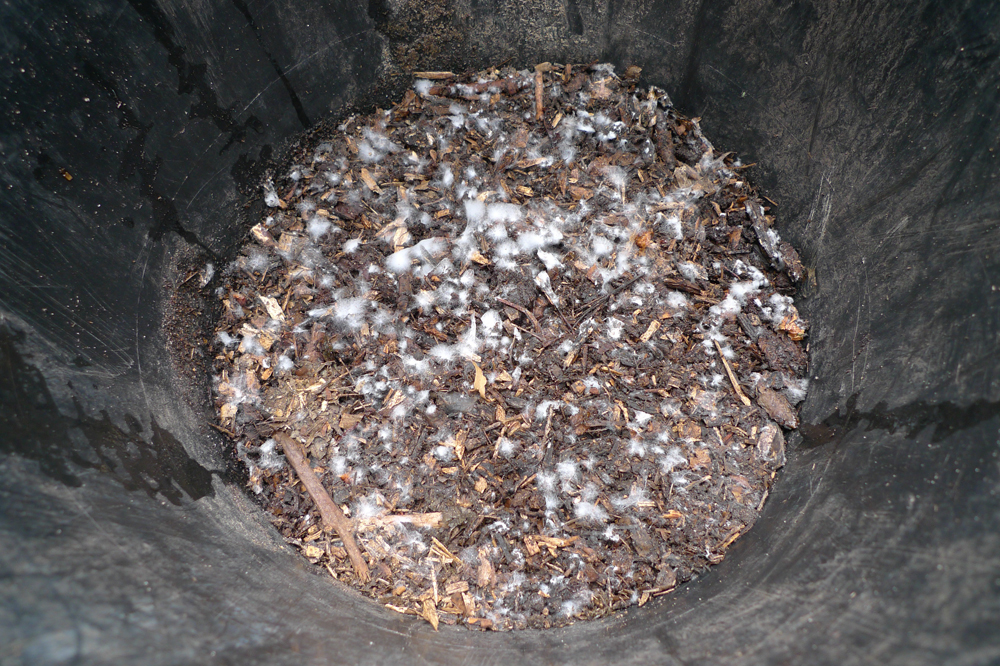 4 – These wood chips inoculated themselves, but we’ll be inoculating our wood-chip mulch with shitake and oyster mushrooms substrate in the future. In any case, for a Hügelbed to thrive, MYCELIA MÜß SEIN! Strew inoculated wood chips around the cardboard in this layer. 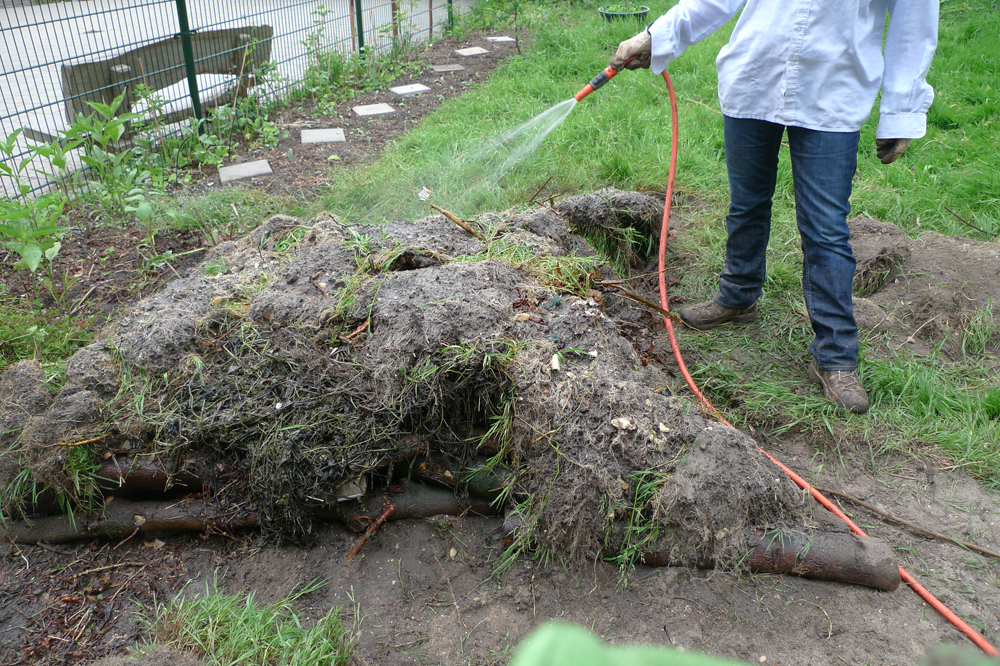 5 – Place the solid material from the fermented compost (all those twiggy bits that don’t ever seem to want to decompose) on the pile. Place that sod roll upside down like a blanket to cloak the pile, sprinkle the heap with some litres of fresh urine, do your witchy dance once or twice around this stinky mess, and wet it all down with water. 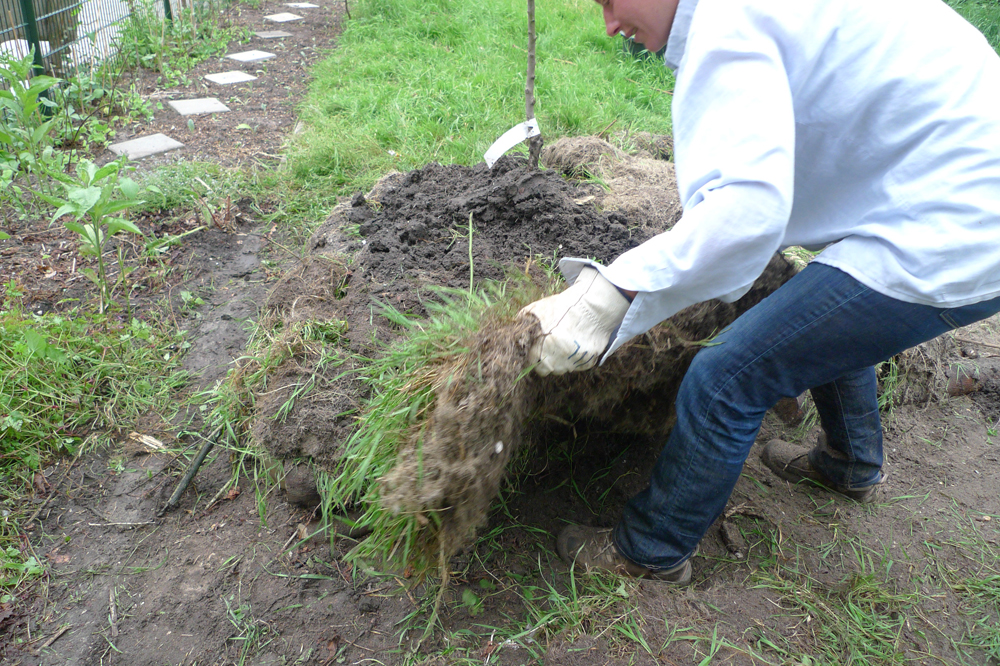 6 – Cuddling up the Hügelbed in a sod roll blanket. 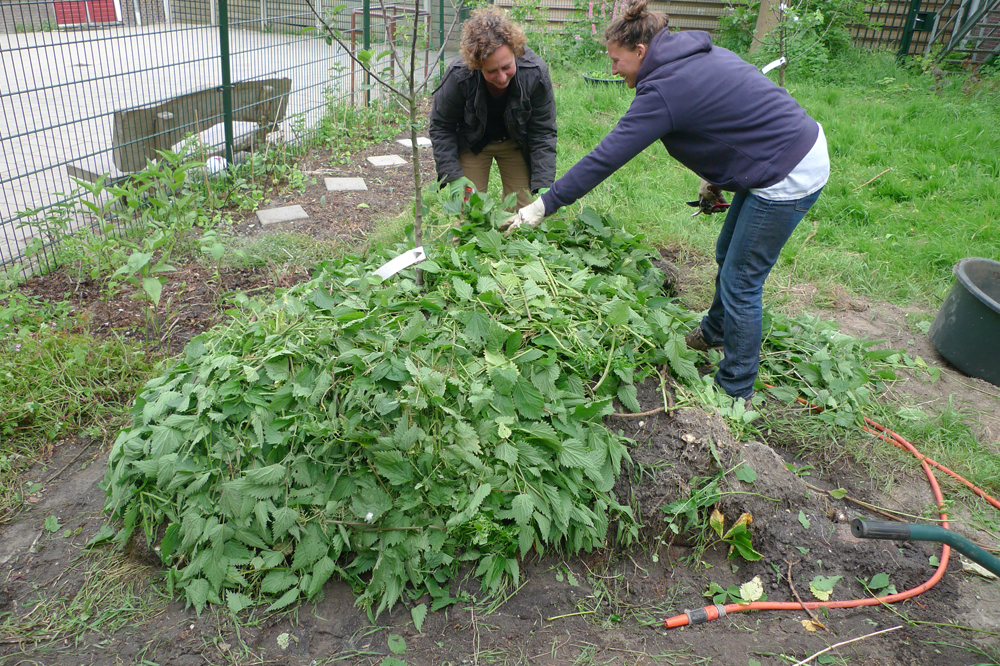 7 – Now it’s time for some green materials! We’ve got lots of nettles but I suppose that grass clippings and just about anything that you have in abundance will do just fine. 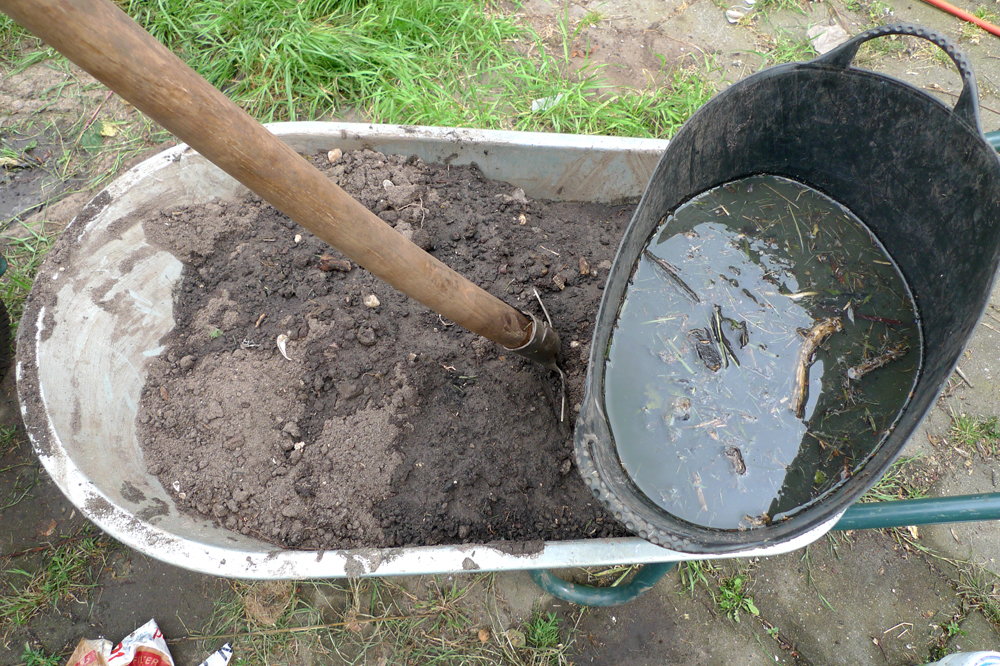 8 – Shmeer the green hedgehog with mud which will form the interior planting layer later on. We mixed our dirt with homebrew fermented liquid compost to give the soil life a kick in the microbial pants. I want to see this heap burp. 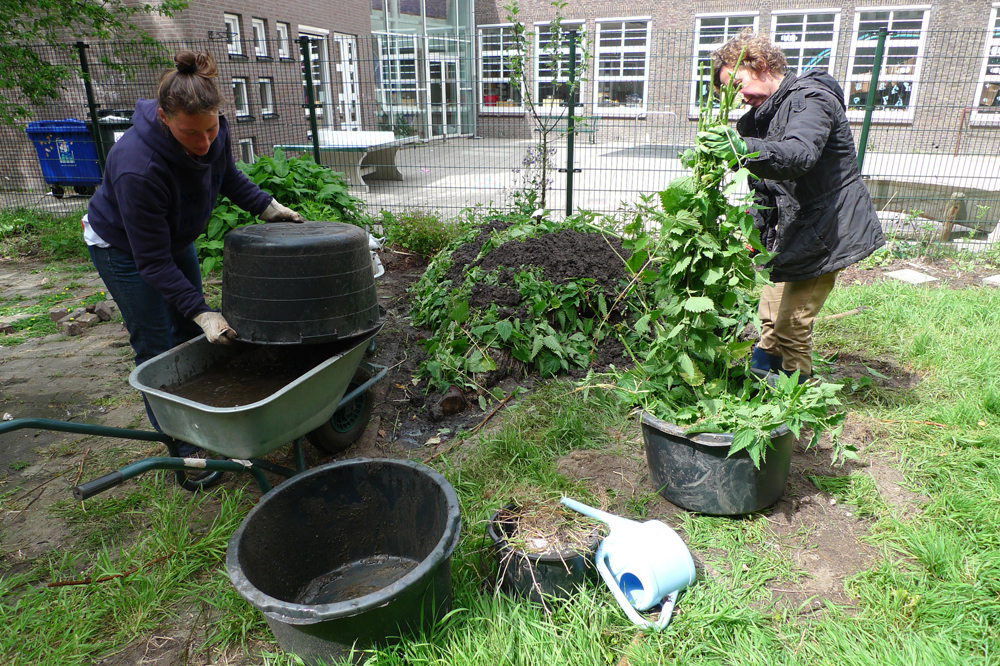 9 – Mariska fills in the remaining gaps with nettles, and Helene smears on the stinkiest mud you’ve ever encountered. Folks walking by demonstratively hold their noses. I live for those moments. 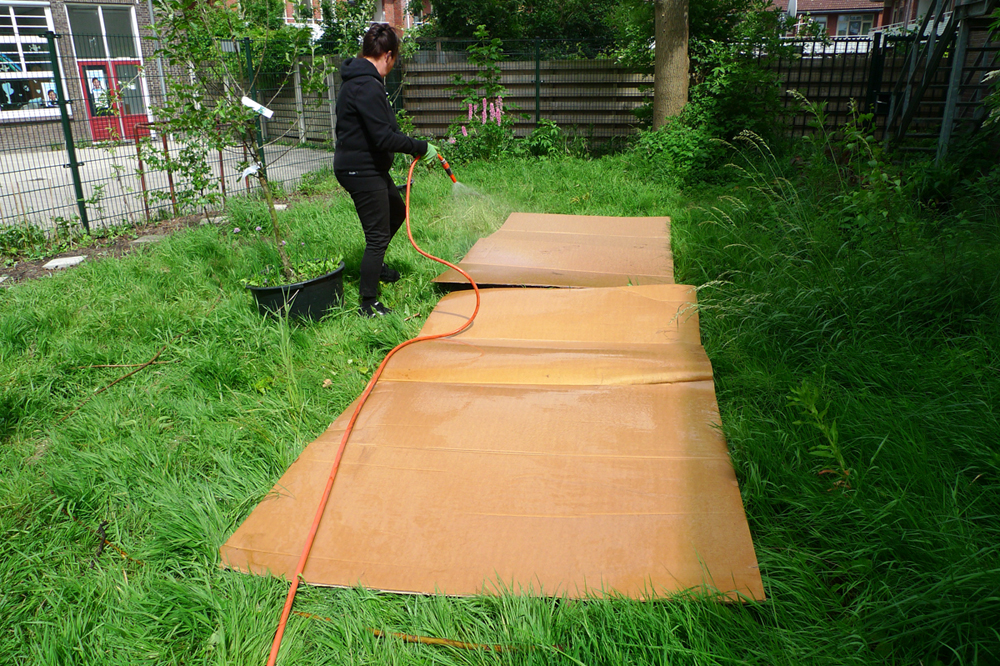 10 – Now it’s time to bind the heap together with a carbon layer so that we can get the entire thing cooking, but also to keep the insides moist for that first microbial and fungal growth spurt. We used cardboard because around here it’s an abundant resource, but you can use old newspapers, which would probably be easier in the planting phase. 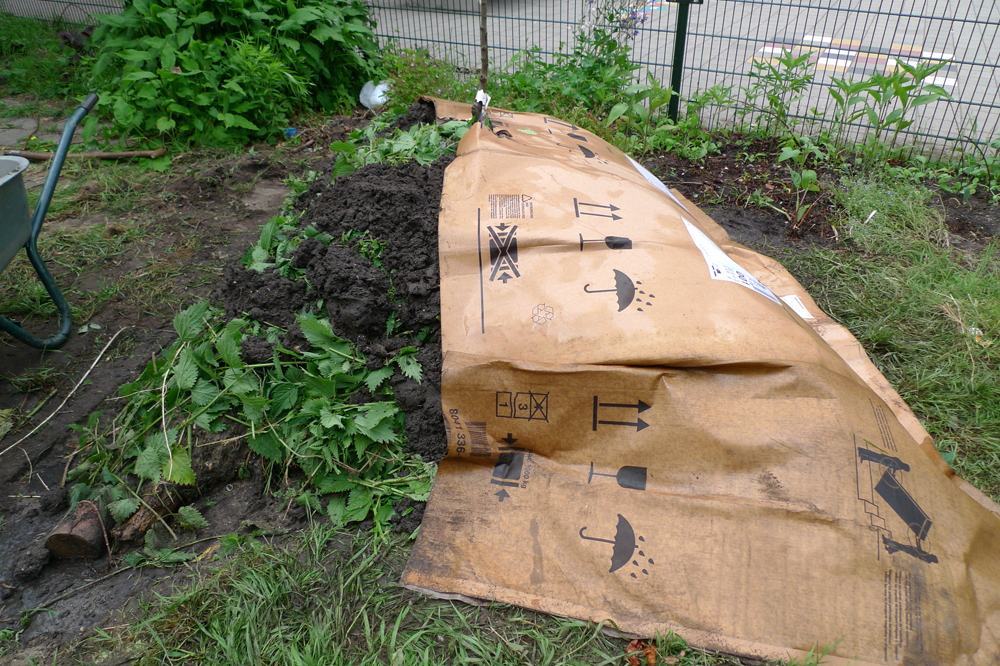 11 – Cover the entire… thing. Push the air out of any air-pockets. A bit of overlap at the bottom is useful to keep out the grass. You’ll cover it all later, so don’t worry about how it looks. 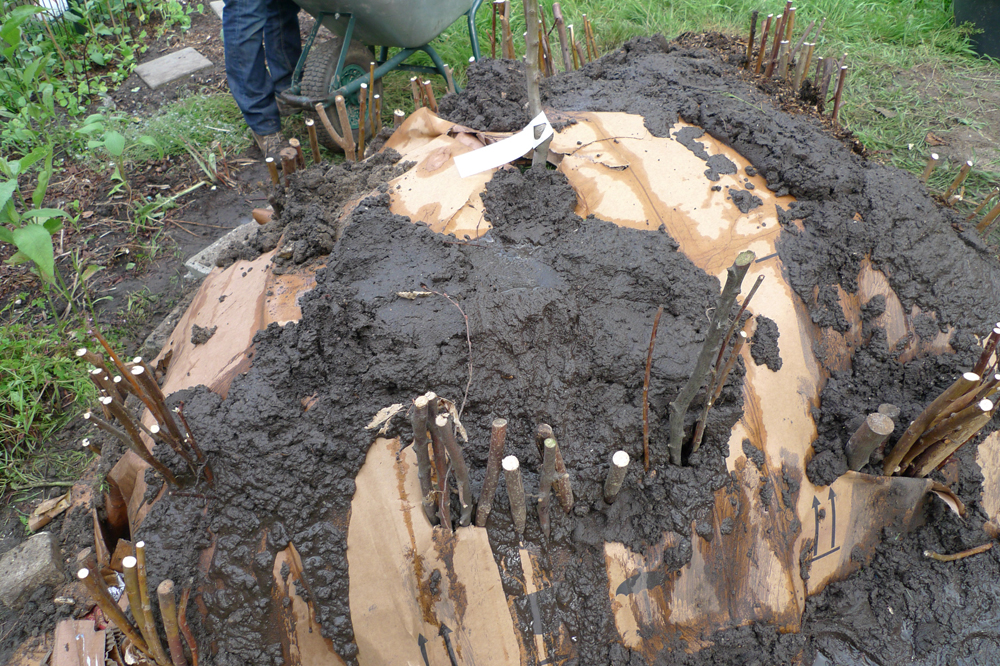 12 – If you made some steep sides, you can poke twigs and branches through to create pockets to plant into. Later when the plant layer has grown a bit, you can cut off the unsightly spines. 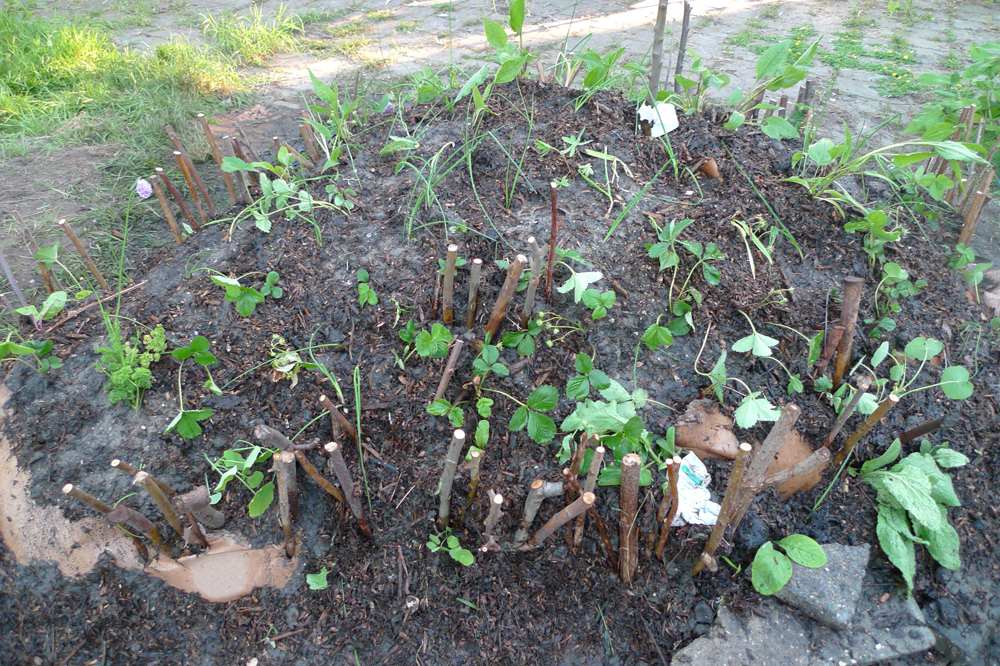 13 – Plant INTO (not on top of) the Hügelbed. Rip holes in the cardboard layer and fill it with earth so that you have something to plant into. In this image, our Hügelbed is only partially planted. We’re all about working in phases and observing which plants thrive and which will wither (based on the sort of root systems that they have). We’ll keep you posted via this blog.

One Hügelbed down, two to go.