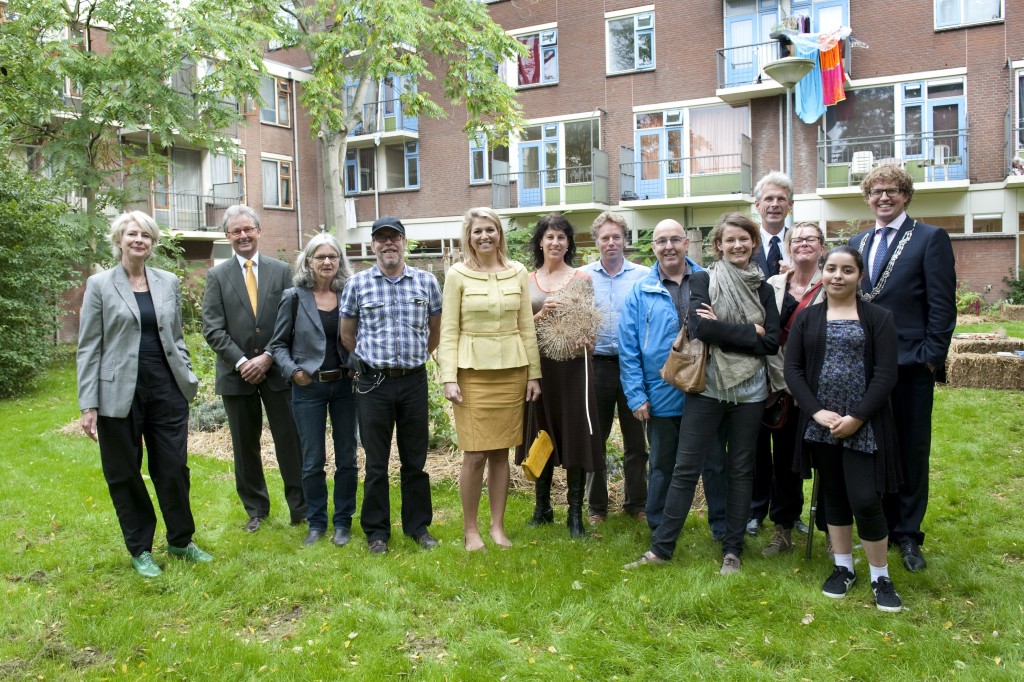 In her role as patron of the Oranje Fonds, Her Royal Highness Princess Máxima visited the URBANIAHOEVE (Social Design Lab for Urban Agriculture) project Foodscape Schilderswijk on Tuesday, October 4th. In one of 1the project’s community orchards, Princess Maxima spoke with URBANIAHOEVE founder Debra Solomon, Foodscape Schilderswijk project coordinator Mariken Straat, the board and project partner Stroom Den Haag. The Oranje Fonds is a generous supporter Foodscape Schilderswijk, with whom it shares the goals of improving social cohesion, community agency, and local participation.
Urban Agriculture and social cohesion
Various topics were discussed during the royal visit, including the meaning, method, and vision of Foodscape Schilderswijk, but also the impact of the project on urban issues such as social cohesion, community, appropriation of public space and food as a practical tool for bringing local residents together. After an initial meeting at community centre De Mussen, the group walked to the Westenberg Hof (one of four Foodscape Schilderswijk project locations) where a number of interested local residents and partners such as the municipality’s Greens Department, were ready to meet Princess Máxima and to show her around the landscaped beds. This Foodscape Schilderswijk location is in one of the courtyards of Complex 217, one of the Schilderswijk’s many enclosed public spaces. Thanks to collaboration with local residents and agencies, what was once a neglected monoculture of grass, a dumping ground for trash, and an under-used piece of public space, the courtyard now boasts an orchard with 14 different cultivars of apple, pear and cherry trees as well as berries, herbs such as rosemary and sage, rhubarb, artichokes, and other edible flowers. The fruit beds, often visually resplendent with the blooms of the ornamental onions are part of an ever-growing continuous edible landscape planted with project participants in the borough’s public space and  which project initiator Solomon refers to as a continuous productive urban foodscape.